We use cookies on this site to improve your user experience

Fostering creativity and building confidence: the E-ACT Passport and our trip to the Isle of Wight 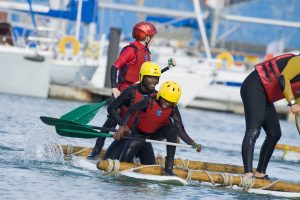 Throughout the year, academies have been working with pupils to tick off the challenges set in their E-ACT Passports. From creating and selling their own products to embarking upon an exciting residential trip to the Isle of Wight, pupils have been undertaking challenges that open doors to a whole range of opportunities. By getting pupils to try something new, the passport helps to raise aspirations and confidence levels – and provides pupils with lots of fun experiences along the way!

Here, Sandra White, Headteacher of Braintcroft E-ACT Academy in Neasden, reflects on her pupils’ amazing experiences through the E-ACT Passport.

One of my highlights this year was the enterprise passport challenge: teams of Year 6 pupils were given £10 each and tasked with creating, marketing and selling a product. I was amazed by their creativity… and their determination to make more money than the other teams!

The challenge brought a lot of children out of themselves. We had mixed the teams up so that pupils were working across all three classes, and I was pleased to see some of our quieter pupils working with children that they wouldn’t normally work with and being confident enough to put their ideas forward and talk to new people.

The money that the children raised went towards some of their end-of-year events, like the Year 6 graduation ceremony. It was so valuable for them to experience creating something, earning their own money and then reaping the rewards at the end.

Challenges like visiting a library are so important as lots of our children won’t have had those experiences at home.

Pupils have done lots more through the passport: like perfecting their times tables through the times tables rock stars game, taking part in a spelling bee, visiting a secondary school and making a trip to the library. While it may not seem like a big deal, challenges like visiting a library are so important as lots of our children won’t have had those experiences at home. If we can help them to discover the library and learn to love reading while they’re young, that will help them greatly in the future.

Through the E-ACT Passport, our Year 5 pupils also had the chance to take part in an exciting water sports residential with the UK Sailing Academy. Over the course of their three-day residential trip, pupils tried out kayaking, orienteering and sailing – all fully funded by the trust, without charge to pupils’ families.

For many of our children, the trip was the first time that they had been away, been on a coach, or even left the local area. The ferry from the mainland over to the Isle of Wight absolutely wowed them. They couldn’t believe their eyes.

To see the pride on their faces when they tackled each activity was amazing.

The trip was a unique experience and pupils got so much from it. When they started kayaking, for example, the pupils didn’t have a clue what they were doing. Some of them were nervous and perhaps didn’t think that they could do it.  But by the end, they did it. To see the pride on their faces when they tackled each activity was amazing. Their excitement and their smiles were infectious, and it was wonderful getting to see them build confidence in themselves, both in and out of the water.

Even mealtimes were an experience for our pupils. A lot of our children don’t eat breakfast or get to eat three meals a day at home. For them, the food at UKSA was a real hit and they were excited to try lots of foods that they had never eaten before. Pupils also learned to clear the table and put their things away. Little moments like that taught them how to do things for themselves and become more independent. One pupil told us that he now appreciates everything that his mum does for him!

The trip made a lot of our pupils grow up. We’ve heard from teachers and parents that the Year 5 pupils were different children when they got back: they’d developed resilience and learned to persevere. One of our parents had been concerned about her son with SEND going on the trip. She felt that he wouldn’t be able to do a lot of the activities, and she was worried about the food as back home he would only ever eat pasta. But when he was on the trip, he tried everything! His mum couldn’t believe it when we told her.

On the way home from the Isle of Wight, we expected the pupils to be exhausted. You’d imagine after a residential trip and all that time outdoors that they would all be fast asleep on the coach. But they were all wide awake for the whole journey back, talking away to one another about all the fun that they had had.

Without offering this trip for free, so many of our children’s families just wouldn’t be able to afford to give them an experience like this. As one of our parents put it, it is an experience that will stay with those pupils for a very long time. The trip has given them valuable skills that will help them as they go into Year 6 and on to secondary school, because they’ve learned to be independent and gained that confidence in themselves.

The post Fostering creativity and building confidence: the E-ACT Passport and our trip to the Isle of Wight appeared first on E-ACT.

How to apply for a place